“She walked slowly, not because of her fatigue but rather to calm her anxious heart. For tomorrow’s announcement may very well unveil the secret she had been keeping for years.” 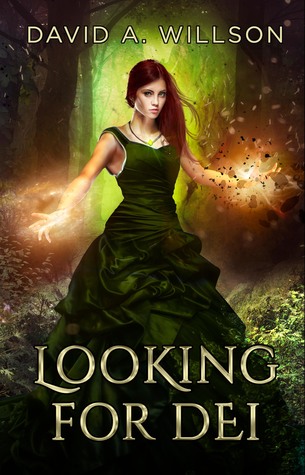 Fifteen-year-old Nara Dall has never liked secrets. Yet it seems that her life has been filled with them, from the ugly scar on her back to the strange powers she possesses. Her mysterious father refuses to say anything about her origins, and soon, she and her best friend must attend the announcement ceremony, in which youths are tested for a magical gift.

A gifted youth has not been announced in the poor village of Dimmitt for decades. When Nara uncovers the reason, she uses her own powers to make things right. The decision sets her on a path of danger, discovery, and a search for the divine. In the process, she learns the truth about herself and uncovers the biggest secret of all: the power of broken people.

In a world where having magical abilities is the ultimate decision factor of a person’s fate, the day of the announcement ceremony is not the most highly anticipated occasion for the young youths who must undergo this trial. But when Nara must choose between hiding her abilities or to save a life, her world turns upside down and brings her on an epic quest.

A world-building novel that draws upon the fine line between light and dark, Willson’s novel dares to explore the boundaries that many fantasy novels refuse to enter and opens up a new world like none before.

The plot is unique

As I began reading Willson’s novel, I realized almost instantly how unique this YA novel truly is. I’ve read a number of fantasy books, but there was something about Willson’s that made it so much more extraordinary. There are certain elements that are commonly found in most fantasy novels, yet Willson still found a way to make it an original. The type of magic within the novel is one example, for I found it rather exotic and a foreign to Western culture…this was certainly a breath of fresh air.

Time and time again, I start reading novels and grow utterly disappointed that there’s this “cookie-cutter” thinking of GOOD and EVIL…Willson’s novel DID NOT disappoint in this regard. The “good” characters commit some heinous crimes, and the “bad” characters experience moments of enlightenment and clarity on a more righteous path. There are some characters that are very clearly good OR evil, but that’s to be expected and it didn’t take away from the overall feel of the novel.

No connection with the characters

Character-driven readers, such as myself, may be disappointed with the connection and bond to Willson’s multitude of characters in the novel. There wasn’t a necessary love or hate for them, but their fates and decisions didn’t really affect me. What’s worse is I felt this with the main characters as well. This could possibly be due to the story feeling rather rushed and the language being descriptive but not intriguing.

The language and dialogue throughout the novel felt incredibly dull and mundane, which may be the reason that I felt little to no connection with the characters; in my personal opinion, the key to an “eye-grabbing” novel is the language. Willson’s language wasn’t confusing or horrid whatsoever; the issue I have is that the dialogue felt very “simple”, something that I would’ve expected from a 9 to 12 years range novel. Additionally, the non-dialogue portions of the novel didn’t put me in a state of “awe” or “wonder” or “desire” to be a part of the universe. It felt “practical” and “factual”. I also found a few spelling and grammatical errors, though these may have been edited in the final version before publication.

Story and character discovery = TOO FAST

In Looking for Dei, there’s NO gradual progression when learning about the characters; readers are basically given the entire background of the character in the first encounter, leaving no room for mystery and hinders on character development. This also overloaded me with information, which does NOT appeal to me, especially in a series based novel. The story felt very similar – rather than small peak into the plot, we’re given PILE of information, leaving me a little confused and disoriented.

A lot “how did that happen” moments

Even though Willson gives us a TON of information very early in the novel, there’s still these “how did that happen” moments…the moments where you have no idea how the story jumped from A to B or character A was able to do that “thing” they weren’t able to before.

Unique and authentic, Willson’s Looking for Dei is a YA novel that introduces a new way of exploring the realm of fantasy and magic. Though the character development and story progression fell short, I feel as though there’s a lot of potential to this new series. If you’re a character and language driven reader, this may not be your cup of tea. HOWEVER, if you’re a story oriented reader and lover of the fantasy genre looking to try a new series, this may be for you.

4 thoughts on “Looking for Dei by David A. Willson || Book Review”