My second time being nominated for The Versatile Blogger Award — super exciting! 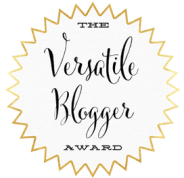 Thank you so much Lauren @ twenty-seven letters for nominating me. I haven’t gotten to look around her blog as much yet, but from what I’ve seen it’s lovely! The aesthetics are gorgeous and I love how she writes little “if you like” items at the bottom of her reviews … it’s super smart (… and something I want to copy but feel bad doing so ha-ha). Makes sure to check out Lauren’s post and her blog!

Click here to read my first nomination, if you want to see the original 7 fun facts about me!

These seem to be a little different from the ones I did last time, so I’m not quite sure which rules are the original … so I’m going with the ones that were on Lauren’s page:

One. I have an unhealthy obsession with Friends

It’s so baaaaad … back in 2017, my roommate at the time was flabbergasted that I hadn’t watched it yet; I’d seen random episodes, but I never watched the full show. So we watched it together … until I couldn’t wait for her and would start to binge each season. Now, I literally start from the beginning again every time I’m done. I know it sounds borderline insane, but this is actually my happy show — it relaxes me and helps me forget about the scarier things in life that I have a hard time emotionally with.

Two. I have YET to travel outside of North America

Okay … I AM working on this. Basically, I went from undergrad to masters to getting a good contract job to getting a full time job … AND I was one of those people that REFUSED to travel until my OSAP (school debt … which wasn’t too bad thanks to my epic parent’s) was fully paid off and I had a good amount of savings set aside. Now I’m a homeowner, so I want the first year and a half to save towards travel AND emergencies. It’s not like I haven’t traveled, but I’m excited to start exploring more … my mom and I plan to travel to I THINK Italy … she’s actually my favourite travel buddy, since we’re scarily alike!

Three. I’m a creature of habit (sometimes to a fault)

I love having a set schedule and routine … coffee in the morning, then fitness (if weekend, fitness evenings during the weekday), chores, reading … it’s ALL set to a schedule. I don’t even need to write it down, since I just naturally have an order to things. But sometimes, it causes me to NOT do things, like socialize and what not. I’m getting a lot better at this, thanks to a lot of my friends getting me out and about. And I always end up enjoying myself … okay … MOST of the time.

Seriously, if you’ve seen my Bullet Journal’s, this probably isn’t a real SHOCK.

Four. I LOVE listening to and watching Christmas and Halloween movies ANYTIME of the year

Oh yes … I’m that person you want to hit or “UGH” at because I love Christmas and Halloween ANYTIME of the year. I was literally singing “Feliz Navidad” the other day without evening realizing it until my colleagues pointed it out. And I watch so many Halloween and Christmas films all year round … it’s a sick habit … I know … I REALLY don’t care though ha-ha!

I can’t stand public speaking. Ever since I can remember, I’ve always had a hard time. When I was younger, it was because I was bullied pretty bad and knew no one cared when I was presenting. I think the mentality stuck, even though I know better now. It’s also the “center of attention” thing. I’m TOTALLY one of the talkers when my friends and I get together, but I don’t like all the attention on me. For instance, I love my birthday … but I don’t like big parties or anything to celebrate “me” … does that make sense? But yeah … I get MASSIVE panic attacks when I have to do public speaking … thank GOSH I don’t really have to do that anymore.

Six. At some point, I want to get my yoga instructors

I’m just gonna be real here … I’ve NEVER been into fitness. The thought of going to the gym or getting in shape just made me sigh forever in high school. Even in my early 20’s, I was always half a** about it. It wasn’t until I started yoga that I realized how much love I had for healthy living. Sitting all day at a desk job, the back pain was intense. So I tried hot yoga … and fell in love. And I reached the best fitness level I’d ever had during this time. Due to an injury, I had to stop yoga (power classes) for a while … but now I’m slowly getting back into it. If I stay this dedicated, I’d love to eventually get my instructors to help others as well!

There’s just SOMETHING about it that makes me super happy. I love the beat/tempo and the chill vibe about it. I would LOVE to eventually go to an indie rock/indie folk music festival someday. Some of my favourites are: Gabrielle Aplin, Dean Lewis (technically pop but he’s always on the indie playlists), and The East Pointers.